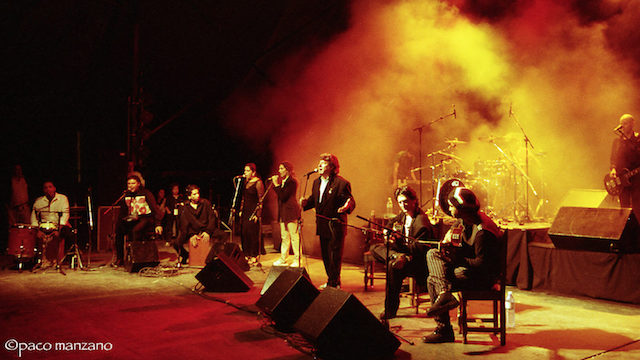 The album “Omega “, by Enrique Morente, released in 1996, is probably one of the most controversial and influential albums in the history of flamenco.

The documentary film ‘Omega’ premiered in 2016, presented the process that led to the release of the album, the problems that had to be overcome, etc. The movie includes an interview with Cañizares.

In addition to the movie, the company (Universal) re-mastered the album, which now included several new tracks, and released it as “Omega 20th Anniversary Edition“.

Cañizares participated with Morente in three tracks of the original 1996 album:

Although the album only featured these three tracks, Cañizares and Morente recorded another theme, a flamenco cover of a song by Leonard Cohen, which was entitled “A singer must die (Un cantaor debe morir )”.

Interestingly, the translation to “singer” was “cantaor” (means “flamenco Singer”), instead of “cantante”.

This is Leonard Cohen’s original theme.

Leonard Cohen “A singer must die“

A singer must die

This theme was at the centre of an anecdote. Morente had recorded the theme time and time again, but he was never happy with the result, and decided to get rid of it. But he did not want to give it up, so one day, when Cañizares arrived to Morente’s house to prepare the recording, Morente asked him:

“Cañi, do you think you can save this theme that I got rid of…?”

Cañizares began listening to some of the demos, and began composing on the trot, resulting in an interesting version. When he showed it to Morente, he loved it, and said ‘You’ve saved it!’

The plan was for the theme to be included in ‘Omega’ in 1996, but for several reasons this was not in the end possible.

Cañizares told me about this anecdote several times, telling me how much he wanted to listen to the theme, but this was proving impossible. As such, it was a wonderful surprise to realise that the theme had been included in the 20th anniversary edition!

‘Omega’ in the Festival Pirineos Sur in 1997

The image above is a historical photograph, of the milestone performance of ‘Omega’ in the Festival Pirineos Sur in 1997. Enrique is singing, standing in the middle, and Cañizares is to the right playing the guitar. The photograph was included in the libretto of the DVD. I want to thank the author of the photograph, Mr. Paco Manzano, for letting me reproduce it.