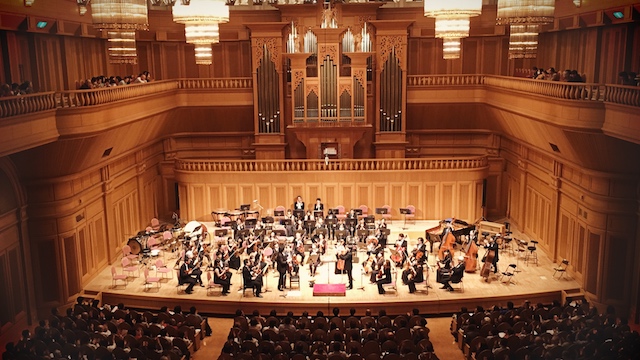 Concert
Cañizares was invited as soloist for the concert held to celebrate the 800th anniversary of the University of Salamanca in the ‘Salamanca Hall’, in Japan

On 14 April, Cañizares performed in the Salamanca Hall of Gifu, Japan, as soloist with the prestigious Nagoya Philharmonic Orchestra, conducted by Master Roberto Forés.

The concert commemorated the 800th anniversary of the University of Salamanca.

Why Gifu? Many people may wonder how this relationship began.

The Cathedral of Salamanca possesses a Renaissance organ which, for many years, was out of repair. A Gifu, organ-maker, Hiroshi Tsuji, was hired to restore the organ with the donations of the Japanese public (approximate 30 million Yen, or 230,000 euros). Ever since, Salamanca and Gifu have maintained a close friendship.

When the Gifu concert hall was built, it was named ‘Salamanca Hall’, and Tsuji the organ-maker, made an organ which was identical to that in the Cathedral in Salamanca.

The vestibule is decorated with a replica of the facades of the Cathedral and the University, built with Villamayor stone, brought from Spain.

During his visit to Gifu, Cañizares gave several interviews and recordings for the TV station NHK, which will make a documentary about this commemoration and Cañizares’ latest flamenco album’El Mito de la Caverna’, the Japanese version of which has been recently released.